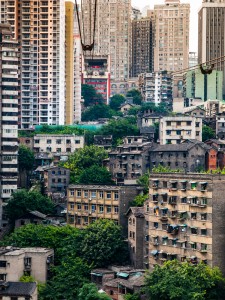 The rapid urbanization of China is an event unparalleled in human history.  Fueled by a near-continuous rural-to-urban migration, the country’s urban population has leaped from a mere 18% in 1978 to 54% in 2013.  The effects of this process are evident in a variety of ways; for example: satellite images of the Earth at night have revealed the intense increase in the illumination of China, indicating the fervent expansion of urban built-up areas.  Traveling through the country exposes one to the uninterrupted urban/suburban landscapes of the many urban agglomeration clusters, such as the Yangtze River Delta (Shanghai-Nanjing-Hangzhou), the Pearl River Delta (Guangzhou-Shenzhen-Hong Kong), and the Bohai Sea Region (Beijing-Tianjin-Hebei). Remote sensing images reveal the alarming rate at which agricultural land is being subsumed by this wave of growth.