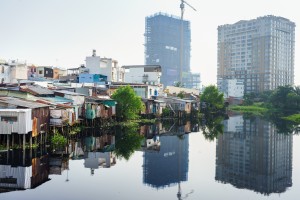 Globally, we have multiple examples of how urban and environmental resources can be owned, controlled and managed differently than the classic 18th century model would suggest, and perhaps more in line with the proposals of Earth Day-era reformers. And this is true even in the developed world. In the U.K. in the mid-20th century the right to change the use of land – especially urban land – was taken away from all individual land owners and vested with the public to provide a broader perspective on what is in the best interests of the community as a whole (Haar 1951). Today, proposed land use changes are negotiated between an owner and a public authority, and if the authority denies a proposed change, such a decision is largely accepted. Similarly the Netherlands has a multi-decade tradition and experience with the idea that property rights are shared between the private and public spheres, and the public interest must be afforded a significant voice in land use decisions (Needham 2014). So alternate notions exist and can be feasibly implemented.