Abstract: Cities are now at the forefront of climate change adaptation and mitigation responses. The rapid pace of local actions to address climate change is moving faster than our capacity to understand their effectiveness, benefits, and unintended negative consequences. There is a critical need to go beyond the descriptive case studies which exist in the literature, or the call for further urban responses to climate change, and to take a more analytical approach to understanding the diversity of responses that exist, the lessons to be learned from them, and the implications for city-level policies and development. The panelists in this session, who together form a diverse group of international researchers of the IHDP Urbanization and Global Environmental Change Project, will draw from their individual research expertise and practical experiences transcending the often typical ‘North-South/developed-developing’ divide, to instead provide a global perspective of urban adaptation in this context and the potential conflicts and synergies between mitigation and adaptation at the local level. Panelists will focus on the lessons learned so far from current urban responses to climate change while also addressing concerns of social and environmental equity associated with uneven patterns of resilience both within and across cities. Reflecting on how responses are shaped by the frames of adaptation, disaster risk reduction, resilience and development and the linkages which exist between them – all of which closely relate to urban governance (in particular, motivations behind the efforts to govern climate change, strategies, and differing institutional capacities amongst cities) will offer pathways for a forward-thinking discussion towards a better understanding of drivers of transformation in urban areas and successful response strategies.
Focus Questions:
1.) How are responses typically framed? Why is this important? What are the linkages that exist between adaptation, disaster risk reduction and resilience?
2.) What factors influence policies for urban climate change adaptation (e.g., differences between the North and South, cities of varying levels of development, political contexts, etc.?)
3.) What makes effective strategies, effective? Are there certain institutional/governance structures which need to be in place?
4.) What is needed for future research? 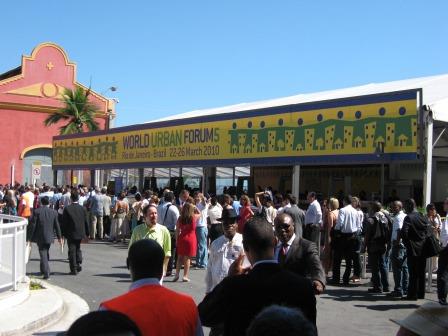 Short Recap:
Reflections on the World Urban Forum 5: The Right to the City – Bridging the Urban Divide

The IHDP Urbanization and Global Environmental Change (UGEC) project along with several other partners will host a networking event focusing on “Urban Responses to Climate Change and Sustainable Urban Development in Latin America”.  The event will build on a UGEC workshop held in 2007 on urban responses to climate change in the Americas.  UGEC responded to the need of new knowledge generation, realizing early on that urban areas were beginning to be considered a central element in the responses to climate change due to a combination of factors of opportunity and risk.  The results of that workshop are reported here.  WUF5 provides a great opportunity for the old group and new members of the network to converge once more for an assessment of progress made in the region since the original report was composed.

At the WUF5, we also propose a novel integration of the themes of ecosystem services and environmental justice in urban areas in the context of global environmental change.  As is the case with the majority of environmental problems facing humanity, anthropogenic climate change affects disproportionately the poor and marginalized groups across different scales – regions, nations, cities, and neighborhoods.  While climate change effects clearly result in both winners and losers, the nations and cities that have been the largest emitters of GHGs for the last 100 years will not experience the bulk of the negative effects of climate change.  The “goods” and “bads” of anthropogenic climate change are not distributed uniformly across populations in the developed and developing world or even across populations within developed countries and LDCs.

We are now at the critical phase where populations with threatened livelihoods due to irreversible climate change and its expected shorter-term effects must begin to consider adaptation options.  Poorer nations and populations have a reduced or nonexistent adaptive capacity that would help protect them from the effects of climate change and thus face increased levels of vulnerability often associated with the alteration of the provision or deterioration of ecosystem services.  Furthermore, poor and marginalized urban residents worldwide often do not have a strong voice in the political arena, resulting in weak representation in policymaking and inequality of opportunities in sustainable urban living.  A stronger joint consideration of justice and ecology offers a mature and robust framework for citizens, policymakers, and scholars to understand the patterns and dynamics of uneven consequences of global and local environmental change.

The present and future well-being of societies is intrinsically associated with the sustainable growth of their urban areas; this involves the ecosystem health and continued provision of ecosystems services within and around cities, justice in the distribution of environmental amenities and ills, justice in the recognition and participation of all affected parties, and wise responses to the challenge of climate change.  This networking event will showcase work that synthesizes new work on these themes – focusing specifically in Latin America.