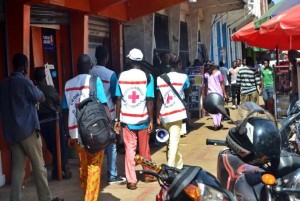 When the Ebola virus struck Guinea in late 2013, it quietly went on to surpass the infection toll of all other Ebola outbreaks combined. It did this by becoming, for the first time in history, an urban epidemic. It moved from a rural village of Guéckédou to the town of Dabola to the capital city of Conakry via a man who was travelling for business. He died shortly after falling ill, at which point his family took his body to his home village of Watagala. Within a matter of days, the disease was on the move. Ultimately, the outbreak, which continues in Guinea, has to date resulted in over 28,600 cases– more than 60 times higher than the number of cases in the previous largest known Ebola outbreak.

Population density in urban settings had a role in the spread of the virus, as did the limited healthcare and public health services in the country (which sadly were impacted even further through deaths from the illness in healthcare workers tirelessly serving on the front lines in treating patients). But the outbreak, as well as the recent appearance and spread of other emerging infectious diseases, also shows the connectivity of rural and urban settings in disease spread. They also demonstrate the links to pressures we are exerting on our ecosystems, and in the process, facilitating more opportunities for new diseases to appear.