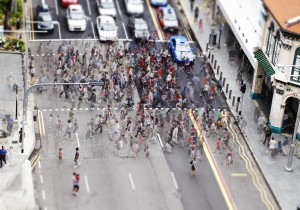 Recently, the term smart city has rapidly turned into a buzzword used with reference to almost any technology-driven urban initiative, encompassing a broad range of aspects of urban life (e.g., quality of life and welfare, sustainability, social cohesion, economic growth, etc.) This makes operationalization of the concept ambiguous and difficult. While there is no commonly agreed upon definition of thesmart city, mainstream discourses present it as “a semantic synthesis and a conventional wisdom evoking efficiency, accountability, self-reliance” (Spaces & Flows: Fifth International Conference on Urban and Extra-Urban Studies, Bangkok 7-8 Nov 2014). Despite relevant differences, an invariant in almost all definitions is the idea that “technologies will play a huge role in urban life in the near future […], including for example the idea that technologies will solve our current (environmental) problems without meaningfully changing our way of life” (Santangelo, Ribera-Fumaz, & March, 2015). The pervasiveness and often the vacuity of smart city initiatives – ranging from the construction of new cities characterised by the ubiquitous presence of technologies of control and organisation, up to single and often disconnected initiatives in existing urban contexts – exposes it to a broad variety of critiques. Wishful thinking more than evidence depicts smart cities as places where a significant integration of technology into daily life allows the creation of more attractive, healthier, sustainable and innovation-orientated environments.