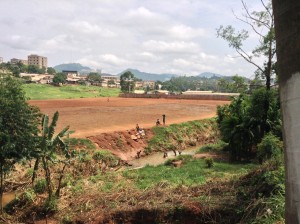 This week’s article comes from Humphrey Ngala Ndi, Kevin Nfor Ntani & Rodrique Feumba from the University of Yaounde I, Cameroon, and Takem Mbi Bienvenu-Magloire from the National Institute of Cartography, Cameroon

Ever since Luke Howard published his study on the urban heat island in London in 1818, the phenomenon has been reported on worldwide. The urban heat island (UHI) refers to a situation where city temperatures are higher than those of the neighbouring rural areas. This results from the predominance of construction materials that tend to absorb more solar energy in the city than in under-developed rural areas (Gartland 2008). The causes of the heat island phenomenon have been covered adequately in the existing literature (Vargo, 2013; Gartland, 2008; Adinna, Enete, & Okolie, 2009), among many others. Few of such studies have covered the African city, whose structure and layout differs significantly from the western city. As a result, the phenomenon has not received such attention as has benefitted the western city in terms of illustration through case studies. In view of this, discussions on UHI in the context of cities in developing countries are relevant for producing such case studies that should sensitise city administrators on a problem whose health impact could become far reaching on city populations. With a  more recent history of urbanisation than other continents, it is obvious that UHI is now being perceived in many African cities. This study examines the surface temperature implications of rapid urbanisation and wetland decline in the city of Yaounde, Cameroon.