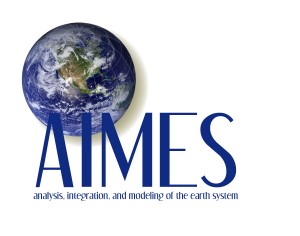 The Analysis, Integration and Modelling of the Earth System (AIMES) project is inviting proposals from institutions that interested in hosting its International Project Office. The ideal institution will have an international reputation in global environmental change, with a particular interest in modelling complex systems and human-environment interactions.

The IGBP Analysis, Integration and Modelling of the Earth System (AIMES) project has been instrumental in the development the notion of Earth System Science (ESS). ESS studies how the planet operates as a coupled system of interacting components, which produce emergent behaviors over and beyond the dynamics of the individual components. This perspective has been slowly moving into the mainstream of global environmental change research over the last decade, in part because of the success of IGBP-AIMES, and its forerunner, the (IGBP- Global Analysis and Integration of Models (GAIM) Task Force) and partner projects (such as WCRP-WGCM and IHOPE).

Subsequently, AIMES has played a vital role in the evolution of climate models into Earth System Models, and in promoting dialogue between climate modelers, climate impacts communities, and socioeconomic researchers, to ensure greater consistency in the IPCC assessment process. Under Future Earth, AIMES is prioritizing the understanding and modelling of human-environment interactions in the Anthropocene. Key overarching themes include land-use change as an exemplar of human-environment interactions, and the characterization and forecasting of critical transitions (or “tipping points”) in the Earth System.

AIMES is now inviting calls from institutions that are enthusiastic to push this agenda forward, by hosting and supporting the AIMES International Project Office (IPO). The ideal institution will have an international reputation in global environmental change, with a particular interest in modelling complex systems and human-environment interactions. Through involvement with AIMES, the successful institution will gain a prominent role in the emerging Future Earth agenda. In exchange, the host institution will be expected to support the coordinating office, which will in turn support the activities of the AIMES co-chairs and the highly-regarded AIMES Scientific Steering Committee (SSC).

The host institute should provide the necessary conditions to accommodate and fund the coordinating office for a minimum of 3 years. Such funding should include the international recruitment and support of an Executive Officer and associated support staff (e.g., a project officer, communication officer), infrastructural support (e.g., website hosting and other dissemination costs) and an annual travel budget for at least the Executive Officer. Preferably, the budget should also include some funding for hosting targeted workshops.

Institutions interested in hosting the AIMES IPO are asked to submit a maximum 3-page ‘expression of interest’ by the 30th of June 2015. The expression of interest should contain information on the host institution, the mutual benefits for AIMES and the host institute, a short description of the activities and roles of the IPO proposed as well as a financial offer in terms of staff and other finances.